Video taken while staring at the ceiling and thinking about the violent history of Tlatelolco.

Kite built with the artist Luiza Margan as a celebration to the live of Nada Dimic.

The first time I went to Dakar was to attend the first session of the Raw Academy in 2016. Luckily enough I arrived at a house located inside the campus of the Cheikh Anta Diop University, the UCAD. I remember how much I was at aw at the beauty of that place. My morning walks from the university to Raw became a sort of magical time, and the university turned into a quasi obsession which I tried to shift into an artistic pursuit. This video is one of those failed attempts to capture just fragments of the poetic character of the UCAD campus.

How to start writing this text? Maybe by acknowledging that I have no clue regarding viruses, pandemics and health system structures; that I will write from a very personal perspective, without quotes, without figures, without validation.

What space is there for bare opinions? For personal stories that emerge out of our own normal lives, out of our very own unexciting experiences. Wait, let me rephrase that, this situation is somewhat exciting, at least for my inner historian. The corona virus global crisis does represent a historical event and possibly a change on the pre-existing human interaction paradigm. And that is what is really frightening.

I am afraid. Not so much of this virus but of the social permanent effects of the same. I’m afraid of the post-corona times. I can also say that I am shocked of the reach of the word pandemia, of the effect of language. It is still hard to believe how easily entire countries obey to such harsh measures such as total lockdowns and closing of borders without having a critical discussion about it. I insist, I don’t really know the medical details and the speed of propagation of this so-called new virus. What I do know is that there are already so many diseases that could have been stopped before hand and that would have saved thousands of lives, a simple example: tuberculosis in South Africa, or the fact that in the XXI century there have been still cases of the plague in the Democratic Republic of Congo. The distribution of health in the world – or of diseases – is clearly combined with global sociopolitical injustice. Is it really that politicians are now caring for the lives of the “most vulnerable” as it is played in the news? Or is it the fact that now the virus has hit hard in the white areas, the areas not supposed to get any uncontrolled diseases? What will happen then when the crisis hits the poorest parts of the world, when the crisis has been dealt with in Europe and in North America; will then the strong borders remain? Will it be the start of an even more racist nationalistic Europe?

This text might be scattered as my thoughts regarding this issue are also scattered, it touches so many aspects of live that it overwhelms me. To name a few: weakening of already precarious labor structures, racism, poor health systems, instauration of states of exception, civilian surveillance, policed streets and public spaces, the astonishing power of the media, increased and promoted isolation, the individuation of problems and so on. We could all benefit from reading a bit more of Foucault and Mbembe and Arendt and Agamben. I was born and raised in Mexico, a country that has faced numerous issues in the last decades. We have faced a “war against drugs” since 2006; that has meant an instauration of a state of exception, which is the suspension of civil rights due to an emergency state. I don’t know the number of people that have been riddled by either the Mexican Army, the Federal, State or Municipal Police arguing them to be “suspects”. And that is what happens in the now very popular state of exception, suspects are stripped from their civil rights for the “greater good”. Could we relate this to what Israel’s Prime Minister Netanyahu is declaring now on a “war against an invisible enemy” and the state’s policies of video surveilling infected people? Rights have been won through numerous, tedious and long-lived struggles. Rights are never a given, they are always a struggle. Especially in the necropolitical regime in which we live nowadays.

My fear would be that many of the rights that have been won can be jeopardized in a matter of hours by what is so far a speculative global crisis. I do understand that health systems can be jeopardized and that is a disaster in itself, but we should be careful of not falling into panic and by that, loosing territories that had been won.

I am now living in Vienna. I have a complicated relationship with this place. To date I still find myself in a perpetual cultural shock. Needless to say, that I also get culture shocked whenever I go back to Mexico but that is another whole topic. In Vienna, I am shocked at the fact that my flatmate is not willing to touch me out of fear of contagion, that people wear gloves more promptly when the people they engage with are black or brown; at the fact that some people wouldn’t even hug their relatives, the people they live with. For me, a life without hugs is not worth living. We already live in a social crisis, with isolation and loneliness going up the charts. With depression being one of the most recurring diseases in Europe. I hear the insistence of “social distancing” and I get really afraid, afraid at how racism, classism, segregation and hate gets activated; because we are all infectious to each other. We are “dirty”. I feel sad whenever people try to avoid me on the streets because I could have the disease or because I am brown or because I smell strange, the reasons to stay away from others can always increase. Now they say that it is social distancing with solidarity. A clean, disinfected, unthreatening solidarity. Talking to a former professor of mine – whose family had to flee to Mexico during the Nazi regime – told me that that these actions are just contributing to the dismantling of Eros. There cannot be real love, real compassion, real solidarity without the incarnated selflessness of the act of love.

“There is a type of drum that resonates as if several are being beaten at once. The same is true for certain voices and songs.” Achille Mbembe

Whenever one thinks about it, every political action – especially in the XXth Century – had to do with its vocalization. Our first element of protest, our reign of power is first and foremost our body, our voice. The student movements of 1968 throughout the world represented the vocalization of the student as a political figure, as an active and demanding member of society. The students took the streets and the public discourse. It was with the power of voice that a movement became a reality. Now, when we try to find more about the residues of the 1968 Senegalese Student Movement we are only able to find remains, minuscule particles of what once was a life, a vigorous and standing voice. We need to ask ourselves if we are not searching in the wrong place: in documents, in newspapers; because when a voice was so strong, as those of 1968 were, it must have left an echo behind.

An installation of at least 8 megaphones was placed in front of the library of the Cheikh Anta Diop University in Dakar, Senegal. These  megaphones automatically reproduced songs of the archival material of the Association de Étudiants Sénégalais en France (AESF) from 1989. This installation was activated as a night walk for visitors to hear the voices of the protest songs while walking the university’s campus.

The aim of this installation was for visitors to appreciate and to ponder upon the UCAD’s history and past students by their own. By reproducing these songs the architectural and historical materiality of the premise allow for reflexion and the possibly for encountering echos of the former and present students of the UCAD. 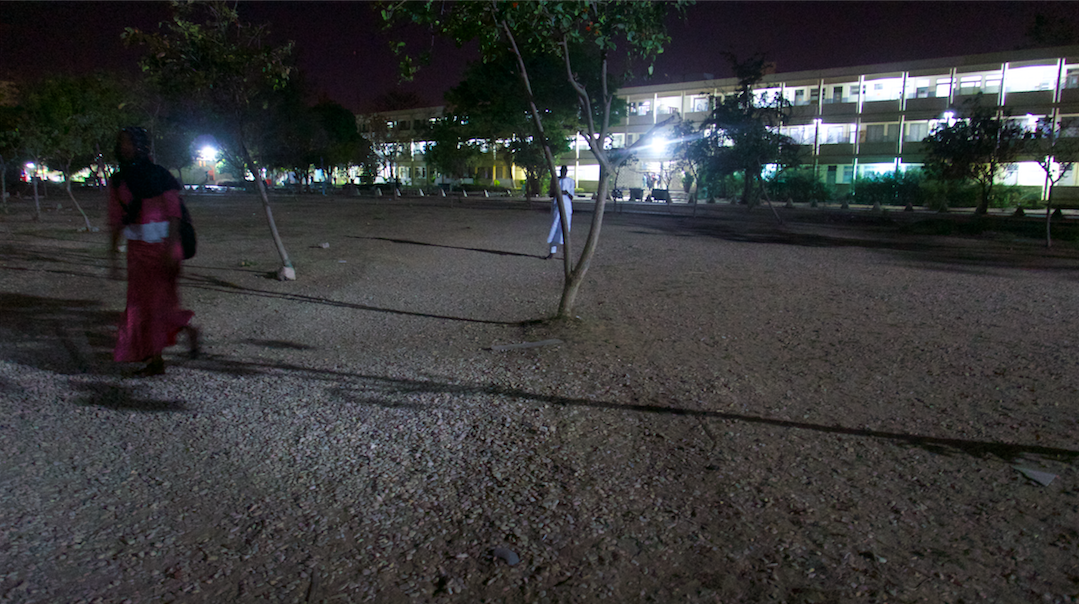 This installation was done as part of the Raw Material Company program for the OFF Biennale in Dakar, Senegal. This intervention was framed as part of the curatorial project The Revolution Will Come in a Form We Cannot Yet Imagine by Dulcie Abrahams Altass.

Thank you to the support of the student association Karbone 14.

The apocalypse is the time when the moon was bloody and the stars fell like leaves, where the sky was no longer there. For the Aztecs, the Mictlan was the other world, a nine-level cosmos were dogs were there to guide you. Mythologies have been mostly crafted in order to explain a particular connection between time and space; a temporality. The Judeo-Christian apocalypse sets the mood for a teleological understanding of time in which a genesis is framed together with a material end of the world. The Aztecs believed in rotating eras; eras propelled by different suns: the water sun, the tiger sun, the rain sun, same which at the end of its cycle turned the rain into drops of fire. Ancient Aztec temporality has its foundations on the idea of sacrifice, destruction, rebirth and cycles. There are eras, there are suns.

Link to the text. 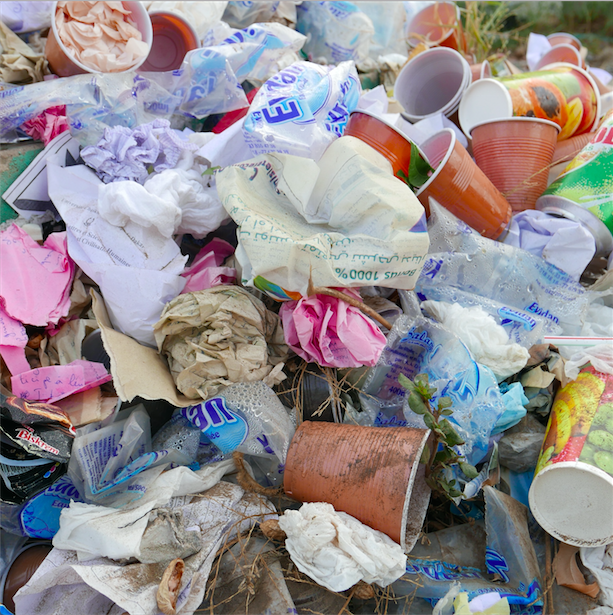